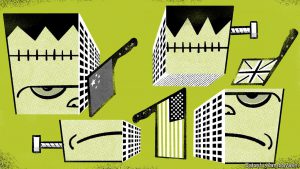 These corporate contortions have glaring limitations. Politicians get to play God: President Donald Trump seems to favour Oracle—whose chairman, Larry Ellison, is a Trump supporter—rather than a bid by Microsoft, which made slightly more commercial sense. Mr Trump may now demand more concessions, and any deal will also need approval from the newly beefed up investment-screening regimes in America and China. Subdividing businesses into national silos duplicates costs, and complex structures can leave it unclear where control lies. Arm is locked in a bitter dispute with a Chinese executive over who is really in charge of its Chinese joint venture.

Despite this, expect more multinational manoeuvres as globalisation unwinds. Australia’s government is asking for Rio Tinto, a scandal-prone global mining firm, to be run by an Australian. European tech firms may bifurcate, with one production line serving Chinese clients and another American ones. Chinese companies may have to make do with buying minority stakes abroad, not full control. Firms crippled by sanctions—Huawei, say—may dissolve, with their intellectual property and best people migrating to competitors that do not face such constraints. Geopolitics is twisting global business into a form that is less efficient and less free. That is to be lamented.